A history of the Victoria Falls Bridge

The following extended feature is adapted from 'Sun, Steel & Spray - A history of the Victoria Falls Bridge', researched and written by Peter Roberts and first published in 2011. The book is available to order online through Amazon and specialist book suppliers.

During the period of the First World War (1914-8) the Falls Bridge was a strategically important transport link for the movement of British South African and Rhodesian troops - and a potential target for German saboteurs, with German South West Africa (now Namibia) only 80 kilometres away. To prevent attack the Bridge was defended with a military guard and rail mounted searchlight. A reinforced concrete watchtower commanded a view of the Bridge and the mobile search light shunted back and forth along the Bridge, until finally it was decided to position it off the Bridge, from where it could light up the entire structure.

“The second track was used on several occasions to site the searchlight correctly and... was no easy task. The searchlight was mounted on a bogie truck which was moved from one position to another both on and off the bridge before the authorities were satisfied. Finally it was parked on the south bank, in the vicinity of the Rain Forest, and from this point it was able to command not only the approaches but almost the entire bridge itself even down to the foundations.” (Rhodesia Railways Magazine, May 1964)

A Tale of Two Boats

The Bridge and railway from the Cape played a strategically important role in the balance of power north of the Zambezi, illustrated in an audacious British plan to challenge German control of Lake Tanganyika. Adjoining German East Africa (now Burundi, Rwanda and mainland Tanzania), German dominance of the lake was broken in a series of engagements known as the Battle for Lake Tanganyika.

At the start of the war Germany had two large warships on the lake, the 60-ton Hedwig von Wissman, and the 45-ton Kingani. The sinking of the British African Lakes Corporation’s steamer, the Cecil Rhodes in November 1914 gave them unchallenged control of the lake and ability to launch incursions into the Belgian Congo and Rhodesias.

In April 1915, John R Lee, a big game hunter and veteran of the Second Boer War, arrived in London with an ambitious plan for the British Admiralty. Lee brought news that the Germans were assembling a third ship, the 1,200 ton Graf von Götzen, which had been constructed in Germany, disassembled and packed into 5,000 crates and transported by ship to Dar-es-Salaam and then by rail to the lake. Lee proposed the transportation of two small and highly mobile motor launches, armed with mounted guns, from Britain to the Cape by sea, then from the Cape to Elizabethville by rail (crossing the Victoria Falls Bridge in the process) and then hauling them overland the final distance to the shores of Lake Tanganyika.

Admiral of the Fleet, Sir Henry Jackson, approved the plan with the words “It is both the duty and the tradition of the Royal Navy to engage the enemy wherever there is water to float a ship.” Lee was appointed second in command of the expedition, under the command of the only available officer, Lieutenant-Commander Geoffrey Basil Spicer-Simson. Lt-Cdr Spicer-Simson was a rather colourful character, literally, his upper body covered in tattoos. Spicer-Simson assembled a 27 man team to travel with the two selected motorboats, initially built for the Greek Air Force, which he creatively suggested be named ‘Cat’ and ‘Dog,’ names promptly rejected by the Admiralty. His alternatives, ‘Mimi’ and ‘Toutou,’ meaning ‘Miaow’ and ‘Bow-wow’ in French, were somehow accepted.

The boats were launched and tested on the Thames in early June 1915, and by mid-month started their epic journey, transported by steamship to the Cape together with Spicer-Simson and his unit of men, and then on from the Cape by rail the 3,700 kilometres to Elizabethville, where they arrived in late July 1915. Three months later the boats had been transported 240 kilometres through the Belgian Congo and over the Mitumba Mountains with terrain varying in altitude from 2,000 to 6,000 feet (600 -1,828 m) above sea level. Responsible for overseeing the transportation of men and machines through the virgin bush, carving out roads and constructing over 150 temporary bridges along route, was ex-Cleveland Bridge engineer Arthur Davison. The boats were then assembled and sailed the final 640 kilometres down the Lualaba River to the shores of Lake Tanganyika. 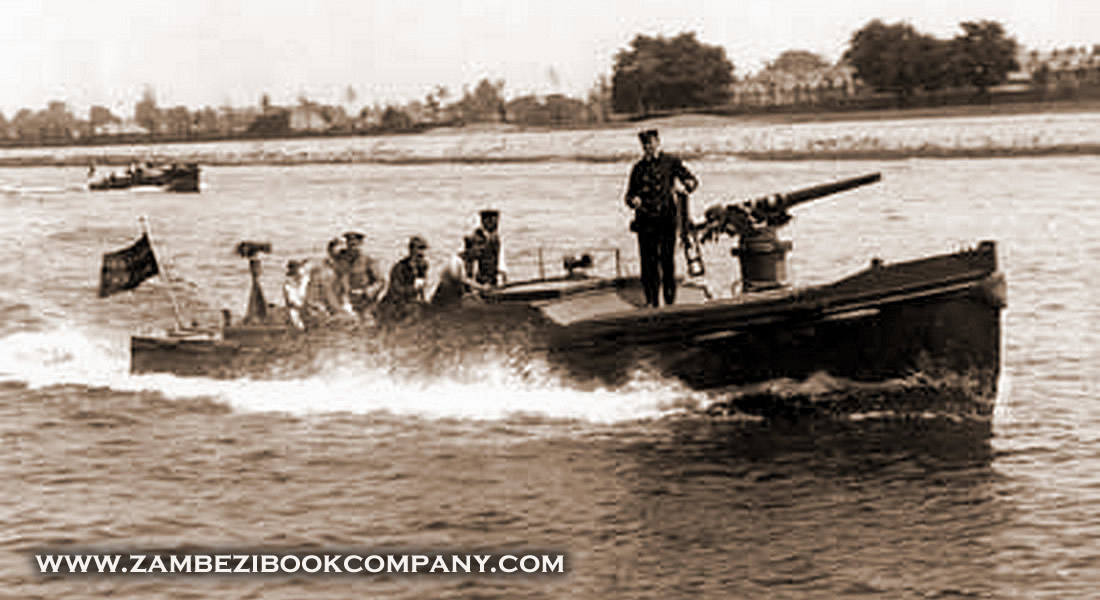 
And Then There Were Three...

It was late December, however, before HMS Mimi and Toutou were finally launched on the lake, each armed with a fore-mounted 3-pounder Hotchkiss gun and aft-mounted Maxim gun. With the element of surprise still on their side, the Kingani, with her 6-pound artillery gun, was quickly captured and relaunched under the British flag - renamed by Spicer-Simson as HMS Fifi. She was the first enemy warship to be captured by the British during the war.

It was some time before the Germans came looking for the Kingani. The Hedwig, armed with a 12-pounder gun, was engaged in February 1916, and following a prolonged cat and mouse chase lasting several hours was finally critically hit by HMS Mimi with their last available ammunition shell. The Germans abandoned ship, scuttling her in the process. Spicer-Simpson was by now promoted to Commander, but reluctant to take on the much larger and more heavily armed Götzen, which soon came out in search of the missing Hedwig, with his small flotilla of boats. On seeing the superior enemy ship Spicer-Simpson apparently went back to bed, forbidding his men from attacking. Instead he went off for several months on a mission to find himself a bigger boat.

Meanwhile the British had provided the Belgians with four Short floatplanes to attack the Götzen whilst moored in harbour, and after several unsuccessful bombing runs the Germans withdrew in late July 1916, carefully scuttling the ship in the process. Only later was it discovered that her guns were wooden dummies - having been removed by Lieutenant Colonel von Lettow-Vorbeck for use by his mobile artillery units in his overland campaign against the British.

The exploits on Lake Tanganyika caught the public imagination, and were adapted by C S Forester for his book The African Queen, later made into the film of the same name, directed by John Huston and starring Humphrey Bogart and Katharine Hepburn.

Following reports of his erratic behaviour Spicer-Simson was not given another command. He become known for his unconventional habit of wearing a skirt, which combined with his tattoos earned him a rather eccentric reputation. The Götzen was later raised by the British, when it was found that little work was needed to be done to repair the ship. She returned to service on 16th May 1927 under the name Liemba, and still sails Lake Tanganyika as a passenger and cargo ferry.

- Go back to the Bridge feature section index.