The following extended feature is adapted from 'Sun, Steel & Spray - A history of the Victoria Falls Bridge', researched and written by Peter Roberts and first published in 2011. The book is available to order online through Amazon and specialist book suppliers.

The Lion of Africa

During the period of the First World War the Victoria Falls Bridge was a strategically important transport link for the movement of British South African and Rhodesian troops, and a potential target for German saboteurs.

The main threat to the Victoria Falls Bridge and British territories north of the river came from a rebel German unit under the command of Lieutenant Colonel Paul von Lettow-Vorbeck (1870-1964), known as the German 'Lion of Africa.' 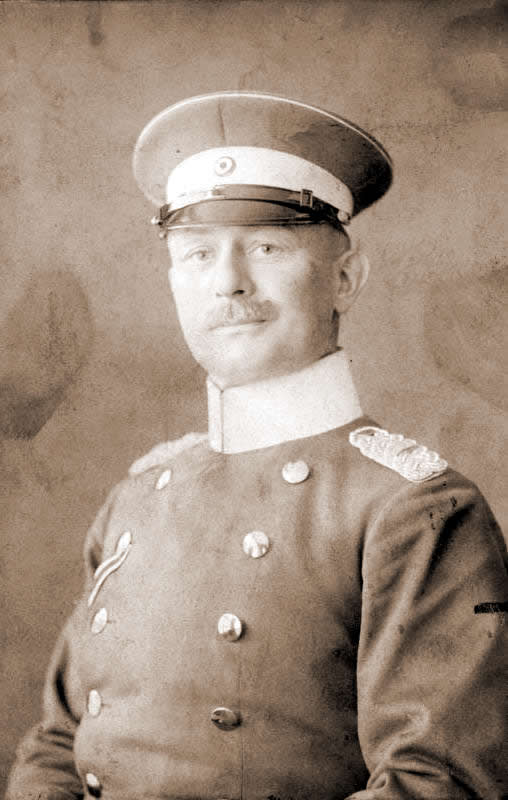 "When the war broke out in 1914, the Germans found themselves isolated in their East African colony. Their forces consisted of some 200 German officers and 2,500 local African troops, called askaris. In addition there were some 2,500 volunteers from the German settler community. All were poorly equipped, many with outdated rifles and scattered about the vast territory of Tanganyika, as Tanzania was then known." (The Irish News, 2016)

Stationed in German East Africa (later Tanganyika, now mainland Tanzania), von Lettow disregarded orders from Berlin and ignored the colony’s Governor, Heinrich Schnee, who had attempted to negotiate neutrality for the territory. Instead he prepared to repel the arrival of the British, under Major General A.E. Aitken, in early November 1914 in what would become known as the Battle of Tanga, the first major event of the war in Eastern Africa.

"The British sent an expeditionary force of 8,000 from Mumbai in British India and assaulted the key port and railway terminus of Tanga. It was badly planned and executed. Von Lettow-Vorbeck used his thousand-man force shrewdly, and after four days of fighting the British retreated to their transport ships, leaving behind modern rifles and ammunition as well as field guns and food supplies, items badly needed by the Germans." (The Irish News, 2016)

The battle was nothing short of a disaster for the British, being recorded as 'one of the most notable failures in British military history.' Casualties included 360 killed, 487 wounded on and up to 148 missing on the British side; the Schutztruppe lost 16 German officers and 55 Askari (killed), with 76 wounded. The Germans subsequently released the British officers that had been wounded or captured after they gave their word not to fight again during the war.

Rebel With a Cause

Embarking on a determined guerrilla operation to disrupt and attack enemy activities, von Lettow aimed to tie down as many British and Allied troops as he could, intending to draw men and resources away them from the main theatre of war in Europe.

Commanding a force of up to 14,000 men (comprising 3,000 German soldiers and 11,000 African 'askari'), von Lettow avoided direct engagements with British forces, instead undertaking a four year campaign raiding Allied targets in British East Africa (modern Kenya), Uganda and Northern Rhodesia (Zambia), attacking forts, railways and communications. His exploits in the campaign have been described "as the greatest single guerrilla operation in history, and the most successful." 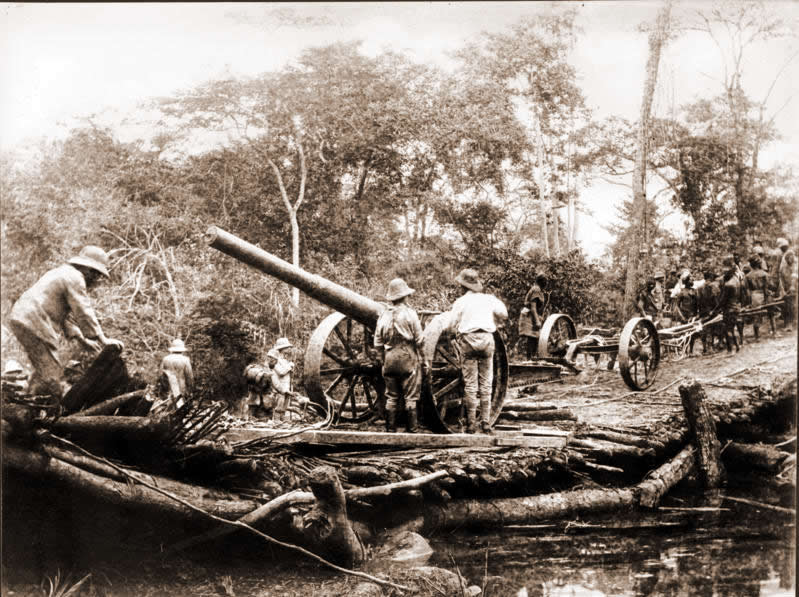 End of the War

It was only on the 14th November 1918, three days after the official surrender of German forces, that von Lettow was informed of the armistice and agreed to a cease-fire at the spot now marked by the Von Lettow-Vorbeck Memorial in present-day Zambia.

Mr Hector Croad, then Magistrate at Kasama, accompanied by Lieutenants E J Leslie, J Davey, D Barraclough, met General von Lettow Vorbeck at 8 a.m. on the morning of November 14th and told him officially of the signing of the Armistice by the German Government. His report of the meeting was later published in the Northern Rhodesia Journal.

"We got into the Chambezi factory at 6 a.m. on the 12th and found the evcuation of stores going on by cane and carriers down the river. R Davey (Assistant Native Commissioner) ... collected what rifles there were and issued equipment and ammunition. An outpost was placed at the Chinshi crossing and another down the river near the Lukulu junction... On the 13th, at 8 a.m., the German advance fired into the Chambezi factory with Lewis guns and rifles. The firing lasted about a quarter of an hour, our askari firing a number of shots though nothing could be seen to shoot at... These men were chiefly Northern Rhodesia Police... The enemy were reported to have moved up the river and to be looking for crossings. About 11. a.m. the official wire about the Armistice came through, and at 11.30 Mr Davy, with Sergeant Rumsey driving, went up the road on a car with a white flag. They came first on a German askari on the road and gave him a not to take to the nearest white German. They turned back with the car and on the road back came on a picket of one white man and twelve askari. They took the white man back with them to Hauptman Spangenberg and gave him the copy of the wire, and my letter to von Lettow, which he said should be delivered at once to von Lettow. He agreed to order his men not to fire."

"On the 14th at 7.30 a.m. I went across the Chambezi and saw General von Lettow, who agreed to cease hostilities and to march his command to Abercorn and to hand over his prisoners, white and black. He gave me the wire for the German Kaiser and asked me to arrange that it should be sent through. He stated his main command did not need food, but Spangenberg's advance guard, that travelled light, did. As much as could be spared was issued to Spangenberg. General von Lettow left the same afternoon on his return to Kasama." (NRJ, 1955)

Von Lettow's own account was published in 1920 in his book, 'My Reminiscences of East Africa':

"I met the British Commissioner, who had come from Kasama to the Chambezi rubber factory, at the river at eight in the morning of the 14th. There I handed him a telegram to His Majesty in which I reported what had happened and added that I would act accordingly. The Commissioner told me the German fleet had revolted, and that a revolution had also broken out in Germany; further, the Kaiser had abdicated on November 10th. All this news seemed to me very improbably, and I did not believe it until it was confirmed on my way home months later." (NRJ, 1955)

Von Lettow was instructed by the British to march north to Abercorn (now Mbala) to surrender his undefeated army, which he did, arriving there on 25th November (Zambia still celebrates the date as the end of the War). His remaining men then consisted of just thirty German officers, 125 German non-commissioned officers and other enlisted ranks, 1,168 Askaris, and some 3,500 porters. Essentially undefeated in the field, the now General von Lettow-Vorbeck was the only German commander to successfully penetrate British territory during the First World War.

A monument was erected in 1953 on the site of the meeting, unveiled on 14th November 1953 by L W G Eccles, CMG, MC, retired Director of Surveys, who had been with the Northern Rhodesia Rifles in the campaign on the northern border.

"It consists of a pillar, with a plaque inscribed in English and in Chi-Bemba, and of a captured German gun. The latter has nothing to do with the East Africa Campaign an was sent out shortly after the war was over to serve as a memorial. It was then lost, but was eventually discovered in the Stores and Transport warehouse at Livingstone about the time the present memorial was being considered." (NRJ, 1955)

"On this spot at 7.30 a.m. on Thursday 14th November 1918, General von Lettow Vorbeck, commanding the German Forces in East Africa, heard from Mr Hector Croad, then District Commissioner, Kasama, of the signing of the Armistice by the German Government, which provided for the unconditional evacuation of all German forces from East Africa." 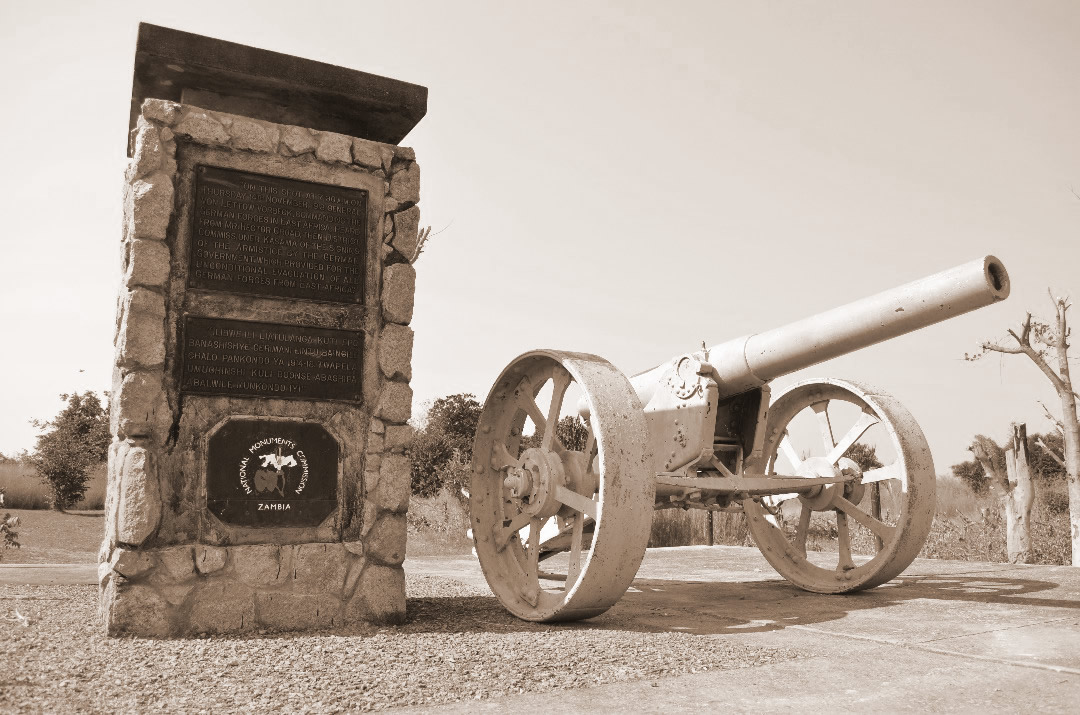