The following text is adapted from 'Footsteps Through Time - A History of Travel and Tourism to the Victoria Falls', researched and written by Peter Roberts and published in 2017. The book is available to order online through Amazon and specialist book suppliers.


The famous Scottish missionary David Livingstone was the first European to visit 'Mosi-au-Tunya', the 'Smoke that sounds' and publicise the existence of the great waterfall to the wider world.

On 16th November 1855 Livingstone was guided to a small island on the very lip of the Falls. Scrambling through vegetation to the sudden edge Livingstone struggled to understand the dramatic scene which lay before him:

“I did not comprehend it until, creeping with awe to the verge, I peered down into a large rent which had been made from bank to bank of the broad Zambesi, and saw that a stream of a thousand yards [915 m] broad leaped down a hundred feet [30.5 m]... the most wonderful sight I had witnessed in Africa.” (Livingstone, 1857) 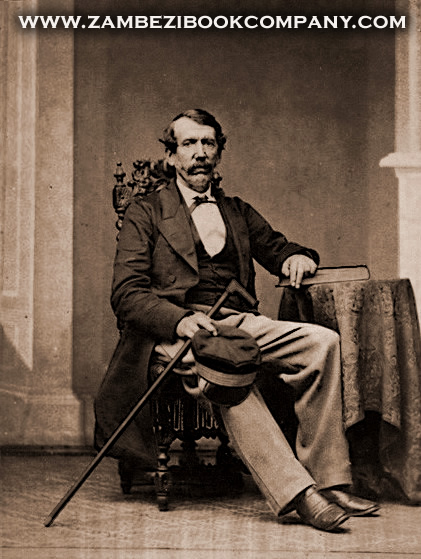 On his explorations Livingstone carefully recorded local names for geographic landmarks. Here, however, he also named them in English - the Victoria Falls - in honour of his monarch, the reigning British Queen Victoria.

“Being persuaded that Mr Oswell and myself were the very first Europeans who ever visited the Zambesi in the centre of the country, and that this is the connecting link between the known and unknown portions of that river, I decided to use the same liberty as the Makololo did, and gave the only English name I have affixed to any part of the country.” (Livingstone, 1857)

Returning to the island the following day, Livingstone planting a small garden of peaches, apricots and coffee seeds. He arranged for one of the boatmen to return and make a fence to protect the plants from the wanderings of hippopotami, hoping that the eternal spray from the Falls would nourish them. In an uncharacteristic act of vanity Livingstone also cut his initials and date into the bark of a tree on the island, which he called Garden Island (now commonly known as Livingstone Island).

Livingstone continued his epic journey following the Zambezi downstream to the east coast, completing a 3,000 mile (4,828 km) trek from the west to east coasts of the continent in the process. Returning to England Livingstone’s accounts of his African travels caught the imagination of Victorian Britain. His first book, ‘Missionary Travels and Researches in South Africa’ was published in 1857 and became an instant best-seller. Livingstone was awarded the Gold Medal of the Royal Geographical Society for his explorations and scientific observations.

The tree bearing David Livingstone's initials would become a focal point for the early adventurers and travellers who reached the Falls, becoming an early tourism attraction in itself.

Livingstone returned to the Falls in 1860 with his brother Charles. By chance they arrived whilst the second European to reach the Falls was still present. William Baldwin, an English hunter, reached them on 2nd August 1860, travelling solo and guided only by a pocket compass.

When the Livingstone brothers, together with Kirk, finally arrived at the Falls on 9th August 1860, Baldwin was still trying to resolve a misunderstanding with the local chief. Livingstone’s arrival helped to smooth the waters, and Baldwin left the following day, recording:

“I had the honour yesterday of cutting my initials on a tree on the island above the Falls, just below Dr Livingstone’s, as being the second European who has reached the Falls, and the first from the East Coast. Charles Livingstone says they far exceed Niagara in every respect and the Doctor tells me it is the only place, from the West coast to the East when he had the vanity to cut his initials.” (Baldwin, 1863)

Thomas Baines and James Chapman arrived at the Falls on 23rd July, 1862, both later publishing written accounts of their travels. Baines and Chapman record visiting the ‘old boatman of the rapids,’ Zangurella, who had ferried Livingstone to Garden Island in 1855, and he showed them the tree where the Livingstone brothers had cut their initials, ‘D. L. 1855,’ and below them ‘C. L. 1860.’ Baines records that the garden Livingstone established had been trampled by hippopotami and was completely overgrown.

Sir Richard George Glyn, with his younger brother Robert and friends, travelled to the Falls in 1863, inspired by Livingstone’s Missionary Travels. When Sir Richard and his party arrived on Livingstone Island they found the initials of the Livingstone brothers and Baldwin were nearly grown out:

“Livingstone’s garden, though strongly fenced, has been breached in many places by the seacows [hippopotami], and is nothing but a mass of rank grass. I could only find the stump of one peach tree. We found his and Baldwin’s initials nearly grown out, so re-cut them, and inscribed ‘Glyn 1863’ by their side.” (Glyn, 1863)

In the early 1900s, Frank Sykes, District Commissioner for the Company Administration on the north bank of the Falls and first Conservator of the Falls, recorded interesting details relating to the tree:

“The Name Tree upon which he cut his initials still remains. Its identity was determined two years ago by the writer... An old white-haired native, by name Namakabwa, who spent most of his time down the gorge catching fish, on being questioned said he well remembered Livingstone, whose native name was ‘Monari,’ coming to the Falls, and described how he (Namakabwa) a day or two after Livingstone’s departure, made his way over to the island and found that a small plot had been cleared of bushes, also that he had made some cutting on a tree. When asked ‘which tree?’ he immediately went to the Name Tree, and put his finger on what had evidently been a cut. The authenticity of the above then is based on the evidence of ‘the oldest inhabitant,’ and may be accepted as genuine. The bark of the tree is so rough and the marks so nearly obliterated that one would have had some doubts on the subject, were the source of information less worthy of belief.

“It is to be recorded with regret that a certain class of tourists, to whom nothing is sacred, had commenced to strip and carry away pieces of the bark from this tree, and so came the necessity for a notice-board and tree-guard, in themselves a witness against the relic hunting vandal who lightly destroys what can never be replaced. Even Livingstone, the discoverer of the Falls, excuses himself for ‘this piece of vanity.’ Would that others were only as sensitive on this point as the great explorer, and delay carving their meaningless initials on the trunks of trees until they can boast such a world-wide fame as was his to excuse the act!” (Sykes, 1905) 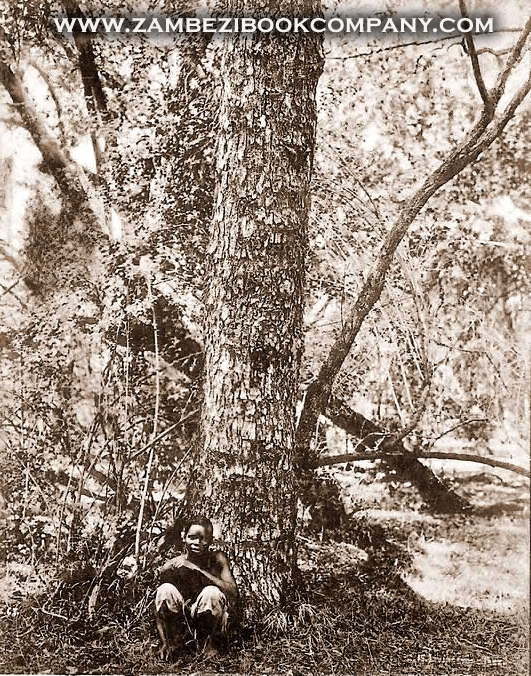 The Livingstone Tree, from an early 1900s postcard by E Peters, Cape Town


Percy M Clark, photographer and author of one of the first guidebooks to the Falls, recorded in the early 1910's that the tree was still standing and now an attraction to the increasing numbers of train tourists to the Falls.

“From the middle of June until the end of December it is possible to visit Livingstone Island (originally named by David Livingstone ‘Garden Island’), the trip being made [from the north bank] by canoe. The tree on which he carved his initials is still to be seen, and visitors should be careful not to mutilate it in any way.” (Clark, c1911)

News reports of the unveiling of the statue at the western end of the Falls in 1934 recorded Livingstone’s initials were apparently still faintly visible on the tree, although by now some doubts were being expressed as to the authenticity of marks and identification of the tree.

“The African paddlers will point out to you a towering tree round which has been placed a circle of stones and will tell you this is the tree on which the famous explorer cut his initials, but there is now no proof that this is so and searches by the Museum authorities and others have so far failed to reveal a tree still bearing the initials.” (Woods, 1960)

The disputed ‘Livingstone Tree’ was still standing into the mid-sixties, and even featured in a BBC television series on the Zambezi made in 1965 by a young natural history presenter, David Attenborough (later Sir). Another ‘Livingstone Tree,’ located upstream at Old Sesheke, and under which Livingstone camped, had blown down in storms the previous year (Attenborough, 1965).