The following text is adapted from 'Footsteps Through Time - A History of Travel and Tourism to the Victoria Falls', researched and written by Peter Roberts and published in 2017. The book is available to order online through Amazon and specialist book suppliers.

The earliest recorded rail tour from Bulawayo to the Falls was arranged in December 1903, six months before the railhead actually reached the Falls. The group travelled by train as far as Hwange, which had been reached earlier in the same month, before transferring to a horse-driven coach service for the remaining distance to the Falls:

“[T]ravellers to the Zambezi were informed that the round trip from Bulawayo would take twelve days. The management of the Grand Hotel, Bulawayo, packed attractive baskets of food, but as fresh meat would not keep indefinitely, tourists were counselled to shoot giraffe and hippo... Arrived at the Zambezi, enterprising fishermen could add to the larder by catching tigerfish - ‘an appetising dish.’” (Rhodesia Railways Magazine, December 1954) 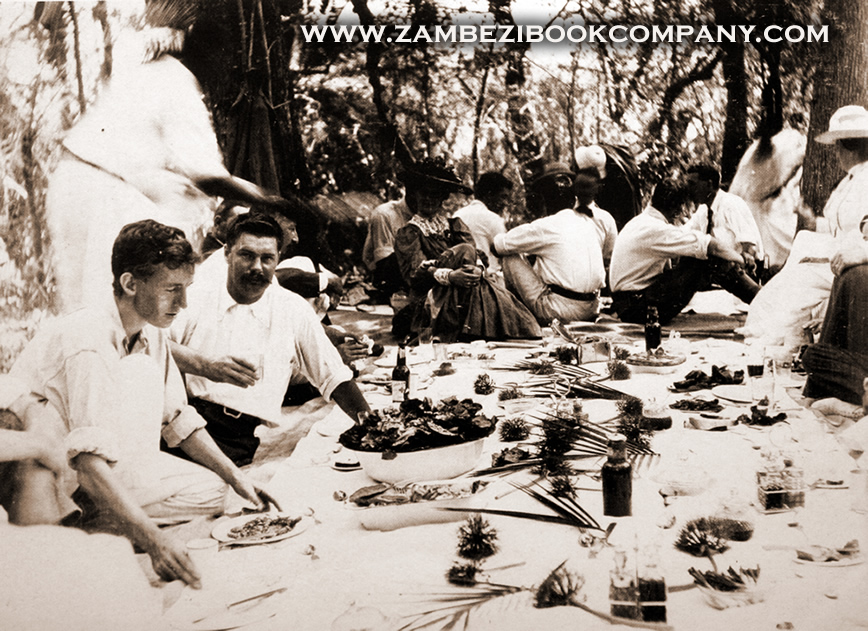 Picnicing at the Falls (Image from Shepherd, 2013)

Christmas at the Falls in 1904 would have seen a significantly different scene to the one the previous year, with the railway now at the Falls and the Hotel six month's old. Construction of the Falls Bridge was well underway, the gorge connected by means of a cable transporter system, with electric conveyor, to ferry people and materials to the northern bank, and a large number of European engineers and railwaymen based both sides of the Falls.

“That tourists are now making their way to this spot in Central Africa to see for themselves the eighth wonder of the world, as the Victoria Falls have been rightly termed, is made clear after a chat with the present hotel proprietor. Last Christmas there were considerably over a hundred persons staying at the hotel, many of whom had to sleep in tents and temporary annexes, so crowded was the building itself.” (Scientific American,1905)

To entertain the crowds a Christmas sports day was held, with live music provided by a band from Bulawayo and a lunchtime picnic under the shade of Palm Grove. Sport events included tug-o-war, a walking race, the very popular ‘bun and treacle race’ - which involved the eating of a series of buns, made by local Livingstone bakers Smith & James, covered in treacle and hung on strings - and ‘tilting the bucket’ (Shepherd, 2013). Clark was again present and describes the scene.

“Christmastide, now upon us again, was always a great time at the Old Drift. Sports were held, and every one turned out for the occasion. There were horse races, and races of men against horse, the man running and the horse trotting. Tilting the bucket was an event that everybody liked. The tilter rode in a wheel-barrow and was provided with an assagai [spear] which he had to get through a hole in a board under a bucket of water. If he missed the hole and hit the board, of course, the bucket swung round and he was drenched. Then we had donkey races. There were about a dozen donkeys in the camp, but no competitor was allowed to ride his own beast. No reins were allowed and the donks had to be ridden bare-backed. I was a competitor. Half-way down the course my donkey, from going well, suddenly baulked. I went clean over the donkey’s head, but landed on my feet. I re-mounted and finished the race, only to be disqualified for leaving my mount.” (Clark, 1936)

Tilting the bucket (Image from Shepherd, 2013)