Always on the look out for a new business opportunity, the enterprising Percy Clark (photographer and curio trader) saw the potential of a local rail transport system to take tourists from the Hotel to his river safari landing stage. Clark had already introduced the first rickshaws at the Falls, pulled by a donkey guided by an African boy, which despite struggling in the sand had been bought by the Hotel to manage 'in-house.' (The Hotel had also bought Clark's river safari business, with canoes and boats.)

“I now got another idea of making money, and I took a trip home on the strength of it. My notion was to run a trolley-line down to the bridge and the landing-stage. I was very kindly received by the BSAC office in London,… but after exhibiting details of my scheme I was told that the whole thing was in the province of the railway company… Then years went by, however, before the trolley-line came into being. I have always believed that I got the idea first, and believing that I think I ought to have shared the profit.” (Clark, 1936)

In 1920 the local rail trolley system was developed by the Railway Company, at a cost of £4,000, to be managed and operated by the Hotel, which was also under the Railway's umbrella.

“The trolley system had three sections, not physically connected. From the hotel, a double track ran one mile northward to ‘Trolley Junction’, where passengers changed to two single track lines leading to the various points of interest. One line (the longest) ran eastward beside the Rain Forest to the Victoria Falls Bridge, and was later paralleled by a road; the other ran northward to the Landing Stage and Boat House, passing the Devil’s Cataract and the memorial to Dr Livingstone... 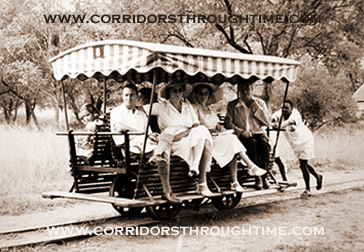 “From the terminus of this line, three-quarters of a mile upstream from the falls, tourists could join launch or canoe trips to the islands in the river. Photographs show two types of vehicle, a four-seat trolley with cross seats pushed by two Africans, and a knifeboard eight-seat trolley pushed by three or four. Each trolley had a roof and canvas awning, and a screw handbrake applied from either end.” (Price, 1966)

Telephone boxes were installed at each terminus and junction so that a trolley could be summoned when required. The fare was one shilling each way. The trolleys were available during the hours of daylight only, although special arrangements could be made with the Hotel Manager for night-time trips to see the lunar rainbow

The growth of motorised transport and development of local road infrastructure paved the way for a more convenient method of local transportation for visitors to the Falls.

"In 1957, the Southern Rhodesia Government built a road to the Boat House, and in December of that year the hotel replaced the hand-pushed trolley by a service of nine-seat minibuses." (Price, 1966)

"For many years an established means of transport at the V F was the use of narrow-gauge small passenger trolleys on rails propelled by Africans. These trolleys were provided by the hotel to transport visitors from the hotel to the river and the falls. It was comparatively easy for the pushers to propel the trolleys on the rails down to the river. All they had to do was hang on to the back of the trolley and apply the breaks when on the downward slope. The return trip from the river to the hotel was a totally different matter. The pushers had a hard job of pushing the trolleys on the upward slope. The exertion required made them perspire freely and their heavy breathing was audible to the passengers. This form of transport had been in used for many years without any denunciatory opinion being made, but in the latter part of the fifth decade the manager of the hotel and the general manager of the railways began to receive letters from guests complaining about the employment of human beings to propel the trolleys. The truth of the matter was that being 'trolley boys' was the most popular occupation of all hotel employees. The job was not nearly as physically taxing as they made out. The heavy panting was made audible in order to secure a good gratuity at the journey's end. As a result of the criticism the use of this picturesque means of transport was discontinued and a small motorbus was provided instead. The hotel manager wisely preserved one of the trolleys; it was placed in the hotel garden where it can be seen to the present day." (Cowen, 1995)

The decommissioned 45 lb (20.4 kg) rails were acquired by the Gwelo and District Light Railway Society and used to build a short two kilometre local track.

Under the shade of the mango trees in the Hotel courtyard stands a reminder of days past, with one of the original trolleys used to transport guests to the Falls preserved and displayed, and offering a shady seat for quiet contemplation. A plaque records:

"The Victoria Falls Hotel trolley service, which operated from the Hotel to the Bridge and the Boat House, was introduced in 1920. Before this date the Hotel guests were conveyed to various points of interest by means of rickshaws. During their life the trolleys were used by some 2 million guests, and were replaced by motor coaches in December, 1957, after 37 years of romantic, yet reliable service." 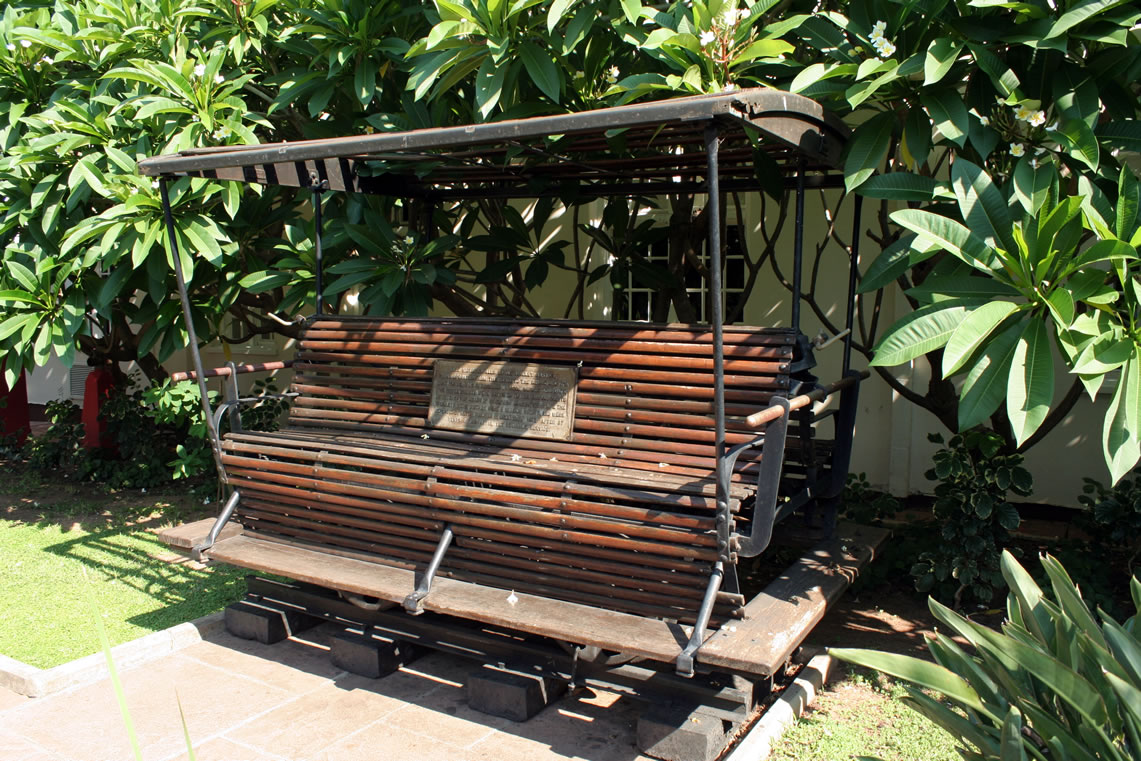