Once the railway from Bulawayo to the Victoria Falls had been completed, towards the end of April, 1904, the Railway Company quickly arranged materials for the construction of a temporary hotel at the Falls, the initial purpose of which was also to provide accommodation for the engineers working on the construction of the Victoria Falls Bridge and continuation of the railway north.

The Victoria Falls Hotel opened on 8th June 1904, the name of its first guest lost in the dusty pages of the past. Many of the Hotel’s early guests would have been linked to the Railway Company preparing for the official opening of the railway line and construction of the Bridge, as well as the occasional adventurous traveller. It is recorded, however, that one of the early visitors to stay at the Hotel, appropriately, was Mrs Agnes Bruce, David Livingstone’s daughter, almost fifty years after her famous father first set sight on the Falls.

Originally the Hotel was intended only as a temporary structure, to house the chief railway contractors, consultants and other eminent visitors involved with the development of the Bridge and railway. As such it was to be dismantled and removed from the site once the concentration of railway construction moved north.

A wood and iron structure, construction of the Hotel had been speedily effected once construction materials had been transported by train to the Falls. The main building, a long wood and corrugated iron structure, was raised above ground level with a wide open veranda overlooking the gorges and rising spray of the Falls, with pull down blinds to shield from the sun. The Hotel was initially capable of hosting 20 guests at a time, with twelve single and four double rooms, together with a dining room, bar and offices, and was equipped with modern luxuries such as electric lights and fans and running hot and cold water. 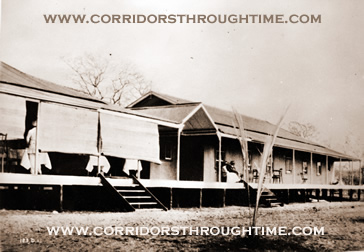 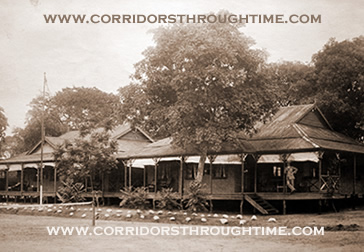 The Railway Company leased the operation and management of the Hotel to the partnership of Mr G Estran and Mr W Scott-Rodger, who were already running the Grand Hotel in Bulawayo and who sent their Manager, Mr Pierre Gavuzzi, to oversee the establishment of the new Hotel at the Falls.

The early Hotel staff were cosmopolitan in origins – Mr Gavuzzi was an Italian, the chef was French, and the barman from Chicago, with service supported by Indian waiters. The young chef, Mr Marcel Mitton, known as ‘the Frenchman who became a Rhodesian,’ would become a famous figure in early Rhodesian history, trying his hand as a hunter and miner as well as a chef.

Percy Clark claimed to have had the first meal served at the Hotel:

“I had the first meal that was served to a customer at the Victoria Falls Hotel. I ate it, I remember, in an annexe to the coal-hole near the kitchen. It was lunch… and I paid about four shillings for it.” (Clark, 1936)

The lowest all-inclusive tariff was twelve shillings six pence per day, and such was the demand for accommodation that within a month of opening an advert had to be placed in the Bulawayo Chronicle notifying visitors intending to stay at the Hotel that they should advise the management in advance of their arrival “in order to ensure accommodation and to avoid disappointment” (Bulawayo Chronicle, 09 July 1904).

The rising numbers of visitors to the Falls did not go un-noticed by the Railway Company, Sir Charles Metcalfe and others soon referring to the Hotel in terms of accommodating guests rather than engineers;

“…the line has been open right up to the Victoria Falls since June 20, and the hotel we have built there for the accommodation of visitors is a very comfortable one. It possesses every modern convenience, and from it there is obtained a beautiful view of the Zambezi Gorge.” (Metcalfe, Sept 1904)

Guest lists from 1904 show people arriving from England, the United States and the Cape Colony. By the beginning of 1905 it was clear that the Hotel needed increased capacity to accommodate the growing number of guests. Arriving in large groups on the train, the Hotel would often be full to overflowing, with visitors frequently having to use train carriages as extra accommodation. An old engine shed was relocated to the site and converted into a large dining room, and further buildings added for extra accommodation, becoming known as the Annex or Honeymoon Suites.

“The hotel, at the beginning, was simply a long structure of wood and iron containing a dining room and bar, bedrooms and offices. Later on it was enlarged by the addition of two large engine sheds removed from railway headquarters. One of these was converted into a dining room and the other into bedrooms. Later still two annexes of wood and iron were put up, complete with bathrooms. In the hot weather the rooms were ovens, and in the cold, refrigerators – but nobody grumbled much. After all, what could one expect in the heart of Africa?” (Clark, 1936)

The British travel agent, Thomas Cook and Sons, as official passenger agent for the Cape Government and Rhodesia Railways, followed the progress of the railway and construction of the hotel in its magazine, the Travellers’ Gazette (9th April 1904) and began offering excursions from Cape Town in the same year. The Company anticipated a rapid expansion of business at “Nature’s greatest spectacle” where the traveller could “enjoy European luxury even here in the heart of Africa”.

The Hotel’s first logo included the African lion and Egyptian sphinx, symbolising Rhodes’ dream of a railway connecting Africa from the Cape to Cairo, and fittingly readopted by the Hotel since 1996.