In August 1906 Henry Holland arrived as the second manager of the Hotel. Having previously been the conductor on the Train de Luxe, his duties including overseeing the management of the Railway's emerging catering services. Mr Holland left the Hotel in early 1908, less than 18 months later, to return to the 'Old Country,' England, but later returned to Africa as manager of the City Hall Hotel in Cape Town. 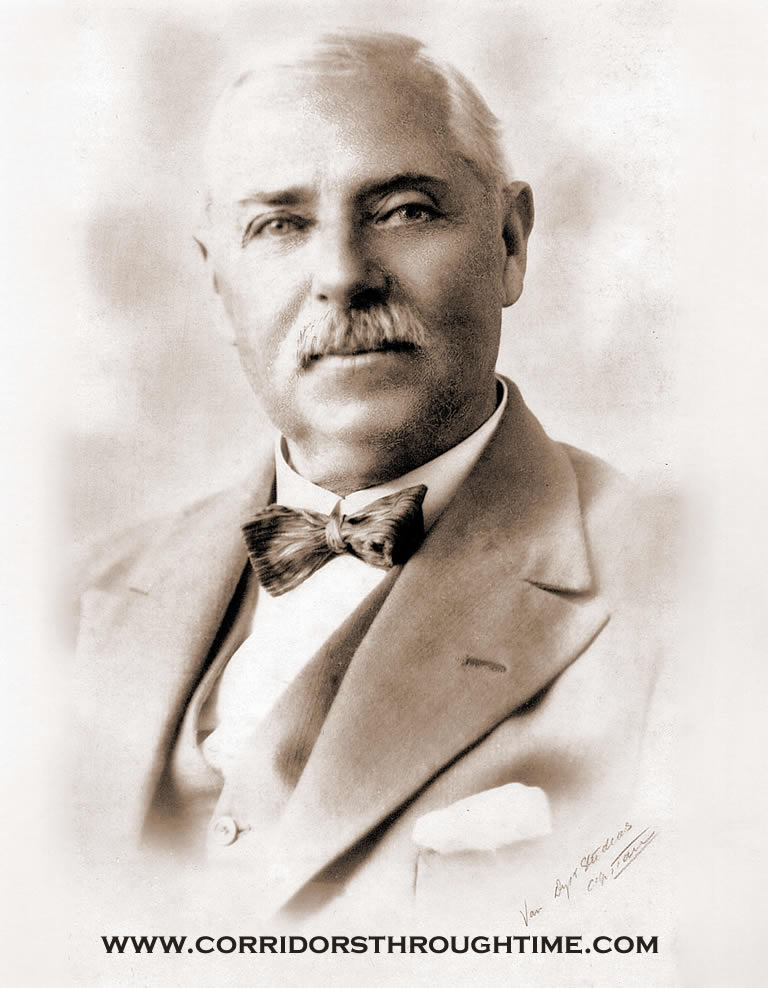 As recorded in a sketch written by Leopold Moore and printed in the Livingstone Mail, No 98, 8th August, 1908, reproduced in Creewel, 2004:

About a score of Livingstonians managed to squeeze themselves in Mr Mills’ Holiday Coach last Saturday afternoon, but it arrived safely at the station. The tedium of the journey over the Falls was relieved by Mr Harrington, who was prominent throughout the festivities, and who thoughtfully distributed a box of hard cooking pears.

On arrival at the Falls Hotel, we were shown to our respective rooms (the invitation included bed and breakfast) and afterwards made ourselves comfortable till dinner-time – eight o’clock. A ‘fourth’ was found without difficulty, so the proceedings did not interrupt study

Punctually the gong was sounded and, with unnecessary delay, close on 40 sharp-set, well-seasoned pioneers trooped into the big dining-hall. The tables were laid in the form of a horseshoe, with genial host Holland in the centre chair. At the far end of the room, a scheme of decoration had been most tastefully carried out. It represented the Falls bridge and the waterfall behind. The material used was coloured paper, and the structure spanned the platform from side to side.

Festoons and coloured lamps bearing seasonable inscriptions gave the scene a holiday appearance, and the clinking of glasses and popping of corks provided a musical accompaniment.

A flashlight photograph was taken by Mr Percy Clark, and then business commenced. The hrs d’oeuvres had hardly been disposed of, however, when a slight difficulty arose. There were objections to Mr Swansons waistcoat; this is a sober garment of modest check pattern in blue, green, scarlet and yellow on a nearly white background, and quite inconspicuous.

A guest protested that he could not eat, as the waistcoat was a disturbing element and an offence, and formally proposed that it be removed. This was duly seconded and strongly supported. The owner, however, deaf to all entreaty, indignantly declined to comply with what he stigmatised as an outrageous indignity.

He would have waxed eloquent on the subject, but the discovery was then made that three other gentlemen were actually wearing coats! Rhodesian dress had been specified in the invitations, and it was forcibly argued that no true Rhodesian had ever been known to possess, much less wear, a coat. Yielding to popular clamour, the coats were removed and, but for the temporary absence of two gentlemen holding different opinions on a point of etiquette, the dinner proceeded with the utmost harmony.

The host’s periodically reiterated inquiry “All right there, Mr So-and-So?” was invariably responded to with “Doing excellently”, as indeed we all were. No invidious distinctions can be made as to the veal cutlets, and gourmets’ opinions of the turkey and sausages. We decline to print any of them. We consider that each course harmonised so perfectly with every other, and that the champagne diffused itself so evenly throughout, that none were in a position to discriminate authoritatively. The dinner the excellent!

Mr Holland having proposed ‘The King’, and the toast having been duly honoured, Mr L F Moore rose to propose the toast of the evening. He said: “Mr Holland, your friends, seated around your hospitable board, have deputed me to speak for them on his happy occasion. They would wish me to say, I think, that they have all thoroughly enjoyed a most excellent dinner (cheers) and that their only feeling of regret is occasioned by the reflection that it is probably the last they shall have with you.

Some of your friends present this evening have known you since you were a guard on the Northeastern Railway, many more, when you were the genial and popular conductor of the Train de Luxe, and all have known you as the most popular host the Victoria Falls Hotel has ever had, or for that matter, is ever likely to have (applause).

I must tell you gentlemen, in connection with our hosts former experience, that it was on the Train de Luxe that the well-known Sleeping-Car incident occurred (interruption). The story is familiar to you all, but none of you, I venture to say, know the sequel, which was told to me in confidence. The popular version ends where the lady returns to find a foot protruding from every berth. In her perplexity, the inexperienced little bride sought the conductor, who put her in his own private cabin – and went and stood on the cold platform outside for the rest of the night (uproar).

By these, and many other means, Mr Holland has gained widespread character for courtesy and kindness. The greatest any man can posses is Character, and Mr Holland’s cannot be injured by the petty animosity of narrow-minded strangers (cheers). I will not refer more definitely to the circumstances attending a recent visit, but will assure our host that he has the sincere sympathy of every soul in Victoria Falls and Livingstone (hear, hear).

During the two years he has been with us, we have all visited his house with more or less frequency, and I have never heard of, much less experienced, anything but the most kindly and cordial reception.

I have no hesitation in saying that the Victoria Falls Hotel was never so well run, as under Mr Holland’s management (cheers). We understand that it is your intention to settle in the Old Country – probably somewhere in the Northern Countries. Well, I am to assure you that, wherever you go, you will carry with you the good wishes of all your Rhodesian friends and, that sometimes you may be reminded of them, I am to beg your acceptance of this souvenir.”

Producing a large silver salver, the speaker continued “We have had it inscribed ‘Presented to Henry Holland by his friends at Victoria Falls and Livingstone, on his departure, February 1 1908’ (applause). Many of us cherish the fancy that we too may some day settle down in some quiet village, not too far from town, where we can enjoy the leisure of a retired pioneer. Your time for that, however, is not yet. We see you still the controlling force in some fresh enterprise, successful by reason of the energy whatever it may be, we hearty wish you success (cheers). It may be that, one day, you may find time to visit the new town at Victoria Falls, witness the great improvement that will have been effected, and have a chat over old times, with your old friends; we hope so (hear, hear).

We wish to make this evening the pleasantest of the many we have spent with you. We want to carry away happier memories of your stay amongst us, and with that end in view, have arranged a programme of music and song. Before we start I will ask you, gentlemen, to drink to the health of our genial host, Mr Henry Holland’ (applause).

As the last strains of ‘For he’s a jolly good fellow died away, the tables were cleared and all gathered around the platform that had been constructed under the model of the bridge, and a really excellent musical programme was performed. By 3am, the last night-cap had been imbibed and all retired, and at nine o’clock in the morning quite a fair muster rolled up for breakfast. Owing to a washaway on the line, the train from Livingstone did not arrive till noon, but by that time, many had returned by ferry. Thus ended a most successful and enjoyable holiday – we could almost find it in our hearts to wish that Mr Holland would take his departure once a month, in perpetuity.